Japan’s economy should boom after the Olympics burden passes. Its stock market will likely rebound sharply too, but one item that has limited Japan’s equity culture, and thus, its wealth, especially for wary pensioners, is overly conservative guidance by corporations for upcoming fiscal year earnings. There are some shop-worn excuses for this tradition beyond simple cultural ones like the country’s penchant for humility, and no one is suggesting hyperbole, but corporations not wishing to seem greedy or too profitable is not a good excuse. Beating weak profit expectations is not a good excuse either, as domestic analysts often broadcast these weak expectations, which is hardly helpful for stock market confidence, as people (and computer programs) often only believe good news when they see it. Then, after seeing profits beat expectations, markets are often faced with another round of conservative guidance.

It is impossible to truly measure the effect of overly conservative guidance, but it is a form of poor corporate governance and it hurts Japan and its investors. Is being overly conservative in any aspect of running a business likely to succeed in this competitive world? The goal is to improve domestic confidence in taking some risk for long-term equity investment, matching that of the Bank of Japan’s ETF program and the government’s tax-incentivized investment plans for retail investors. It is unclear why this problem with guidance has not been addressed, but any rules or guidance from the government or the Tokyo Stock Exchange on this matter should be significantly reformed, so that companies can improve their methods. If, for instance, companies are not confident about predicting next year’s backdrop for growth, they can use official estimates of global and domestic GDP or other data to determine their outlook. In sum, this would lead to a much more honest procedure for earnings guidance that puts regular retail investors on a more level playing field with professionals.

Further regarding governance and the solidification of an equity culture, only a few companies, which were in dire straits, cut their dividend last year. This represented major progress from previous downcycles and as I have long-suggested to managements, keeping dividends on an upward course is crucially important as it shows confidence in the company’s future in a way that reassures wary domestic investors. Indeed, payout ratios should rise to nearly 50% of earnings for stable growth companies, while buybacks should be diminished because domestic retail investors usually do not understand them. By contrast, they definitely understand dividends and desperately need the income. Combining solid dividend growth with more confident earnings guidance will keep building the “equity culture” for long-term investors. As proven in the last two cycles, Japan does not need foreign investors to spur bull markets anymore, but it does need to keep rewarding domestic retail and institutional investors with proper dividends and guidance.

To help provide the truth to these investors, instead of the constant barrage of negativity from the foreign media and aggressive hedge funds, there are other myths to dispelled:

1) Demographics have not stopped corporate profits from tripling over the last decade, as Japanese companies have strongly improved their productivity and corporate governance.

3) As for the fear that countries with high debt to GDP ratios are doomed, while certainly a negative, Japan proves that one can miss a decade of excellent equity returns while worrying about this.

4) BOJ ETFs are an overhang: another case that one can miss years of excellent returns while worrying. BOJ purchases have dwindled this year and in a recent proprietary survey, we found that the vast majority of strategists forecast the BOJ will not sell its holdings in any way that negatively impacts the market (unless it becomes a bubble).

Fortunately, there are signs that Japan’s equity culture is expanding among domestic retail investors, particularly those of the younger generation, many of whom have opened trading accounts at online brokerages in great numbers during the pandemic. Catering to these investors are the country’s largest online brokerages, who have sought to lure younger retail investors by slashing commission fees. 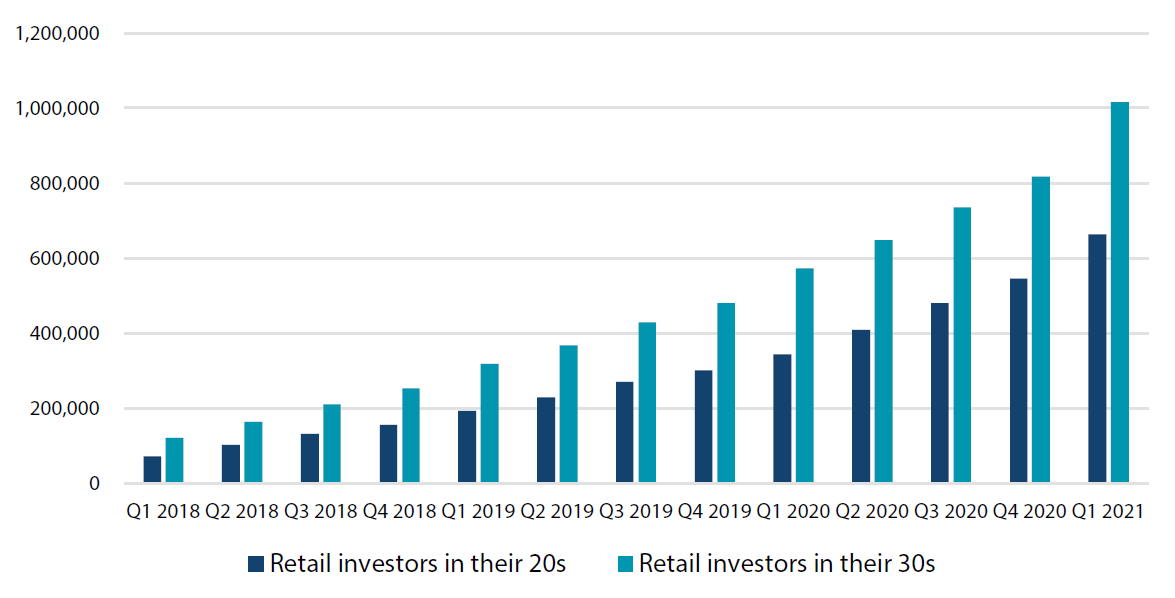 In sum, individual investors who remain diffident about equity investing will likely not retire as comfortably, or for an institutional investor, such an attitude will hamper client or corporate performance. There are risks, especially globally, but there has been a plethora of risks over the past fifteen years; yet, the Nikkei has surged, and yet unlike peaks before, valuations are very reasonable for the overall market. As a side note, investors should completely ignore Japan’s market history before 2005 like a bad dream, as that was the old Japan and we are definitely not returning to that, especially the wild equity valuations of that era. Of course, there will be bumps ahead, but like in every major country, including even Japan now, diversified long term equity investors have been solidly rewarded and should still expect such, especially if Japan’s corporations increase dividend payout ratios to much higher levels and provide honest earnings guidance in a way that encourages the expansion of the domestic equity culture.