With the Nikkei Index breaching the 24,000 mark, its highest level in 26 years, Japan appears to have put its “lost decade” of growth well behind it.
Share this
Download as PDF
by Japan Equity Team
31 January, 2018

With the Nikkei Index breaching the 24,000 mark, its highest level in 26 years1, Japan appears to have put its “lost decade” of growth well behind it. And with the 30,000-point level now well within the Nikkei’s sights, maintaining an underweight bias on Japanese equities may further adversely affect investor portfolios in the years to come.

We believe Japan’s current bull market is well supported by corporate fundamentals, in particular, strong earnings growth. In addition, Japan’s tightest labour market in decades is boosting demand for labour-saving investments, which has been a boon for firms in capital goods sectors. At the same time, many companies are offering higher value-added products and services, both domestically and overseas, while continued corporate cost-cutting efforts are raising margins to a record high level (Exhibit 1). These developments are also contributing to a decoupling of Japanese corporate earnings from currency fluctuations. 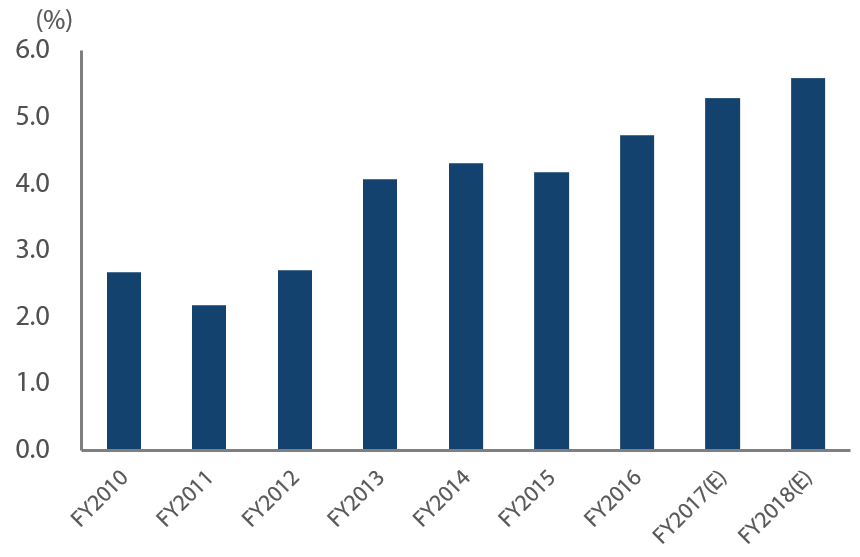 Given the recent upward revision in global growth forecasts by the IMF2, Japan is well positioned to benefit from a rise in external demand fuelled by a strong global economy. Reflecting increased growth momentum and the recently approved tax reform in the US, the IMF now forecasts that global GDP will grow 3.9% in both 2018 and 2019, an upward revision for each of 0.2 percentage point. We believe US companies will quickly move to increase capital expenditures to take advantage of the tax reform’s provisions that allow immediate expensing of such investments. This will also benefit Japanese companies that generate a large amount of revenues overseas (Exhibit 2). 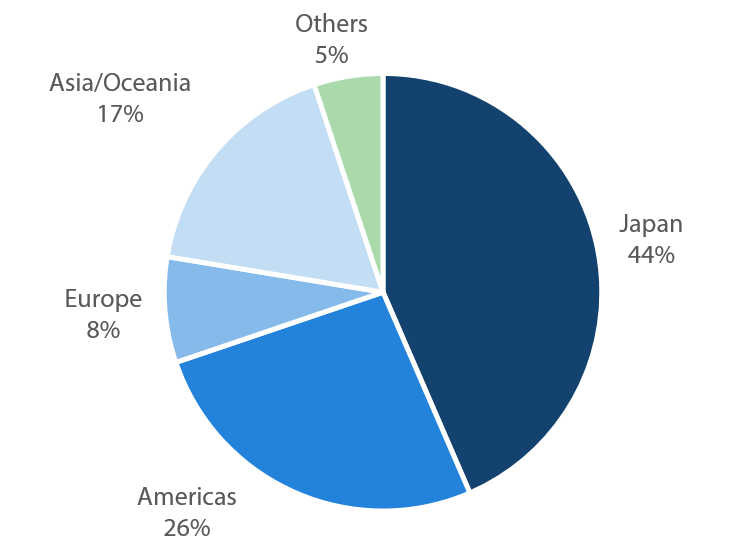 Amid full employment in the US, the Federal Reserve has been hiking interest rates. Meanwhile, in the eurozone, the European Central Bank appears to be in the process of normalizing its monetary policies. Investors are therefore increasingly cautious about the policy outlook for the Bank of Japan (BOJ). While we will have to see whether a new governor is appointed or current governor Haruhiko Kuroda continues to head the BOJ in April, we do not anticipate any material change in central bank policies any time soon. 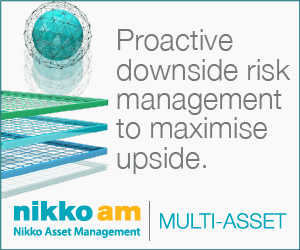 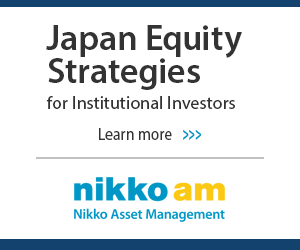 Japan is unique in the sense that there are political factors affecting central bank decisions, the most important being the scheduled increase in the consumption tax (from the current 8% to 10%) in October 2019. Also considering a history of what has proved to be sub-optimal timing in its decisions to employ monetary tightening, we think the BOJ will refrain from making any significant moves until the government has declared an “end to deflation”. This can be attributed to the fact that the BOJ and the government have a policy accord in order to overcome deflation and achieve sustainable economic growth. While we are likely to see a sustained pickup in inflation, we do not anticipate it being fast enough to compel the BOJ to change policy in the very near future.

Absent any material change in policy by the BOJ, we think past data on correlation between the yield of the US 2-Year Treasury note and the equity markets are a good indication of where stocks could be headed (Exhibit 3). Historically, Japanese equities are positively correlated with the 2-Year Treasury yield, a plausible explanation for which is that Japan always lags the US and the eurozone in hiking rates. We therefore think it is highly likely the Japanese equity market will for the time being benefit from the continued rise in interest rates in the US. 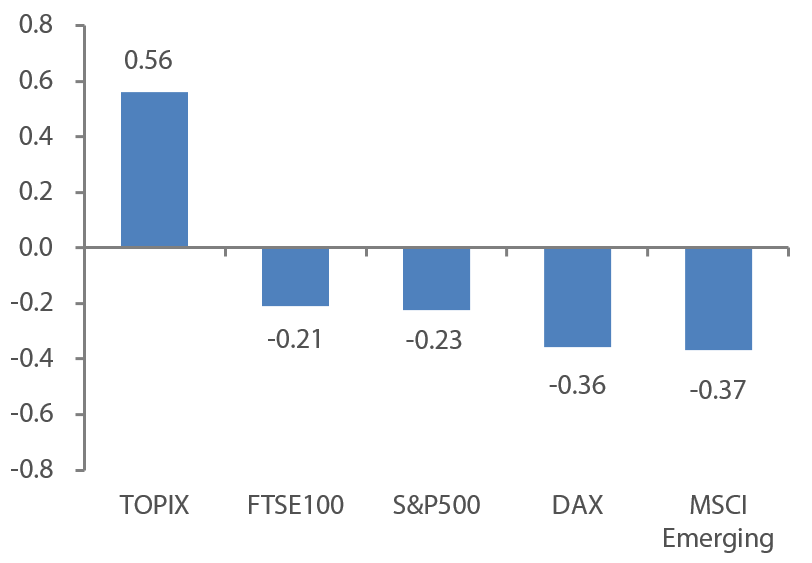 Retail investors need to join the rally for Nikkei Index to reach 30,000

Up until now, the Japanese equity market rally has been driven by overseas investors, corporates (i.e. share repurchases) and the BOJ’s ETF purchase program (worth about JPY 6 trillion per year) (Exhibit 4). However, since the start of the “Abenomics” rally in early 2013, Japanese retail investors have sold a net JPY 28 trillion in Japanese equities, making them by far the largest seller among investor types. Retail investors will need to get back into the market and participate in the rally for it to be sustained. 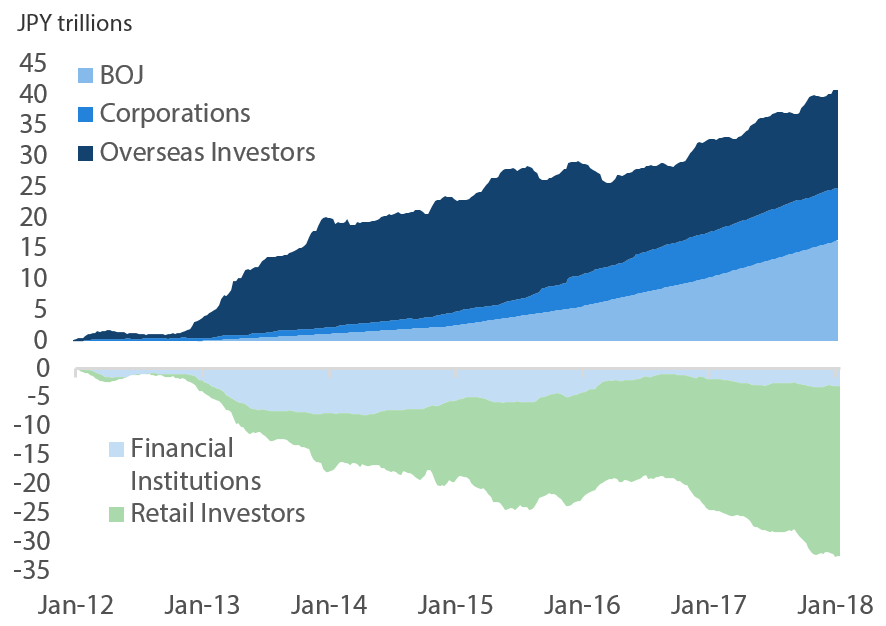 Signs of change for retail investors

Currently, retail investors collectively own 17.1%4 of Japanese companies and remain one of corporate Japan’s largest groups of shareholders. However, these investors may nonetheless have been subject to the effects of the Prospect Theory, which suggests that “the pain of losses is greater than the joy of gains.”5 When we look at cumulative trading volume versus the price level of the Nikkei Index since 1988, we can see that much higher levels of trading took place when the index was below 21,000 points (Exhibit 5). The much lower levels of trading at its current price of well over 21,000 indicate that the majority of the shares that had been held throughout the years in order to avoid realized losses have since been disposed of as the index moved toward its current higher level. We can therefore expect retail investors to make more forward-looking investment decisions in the years to come. 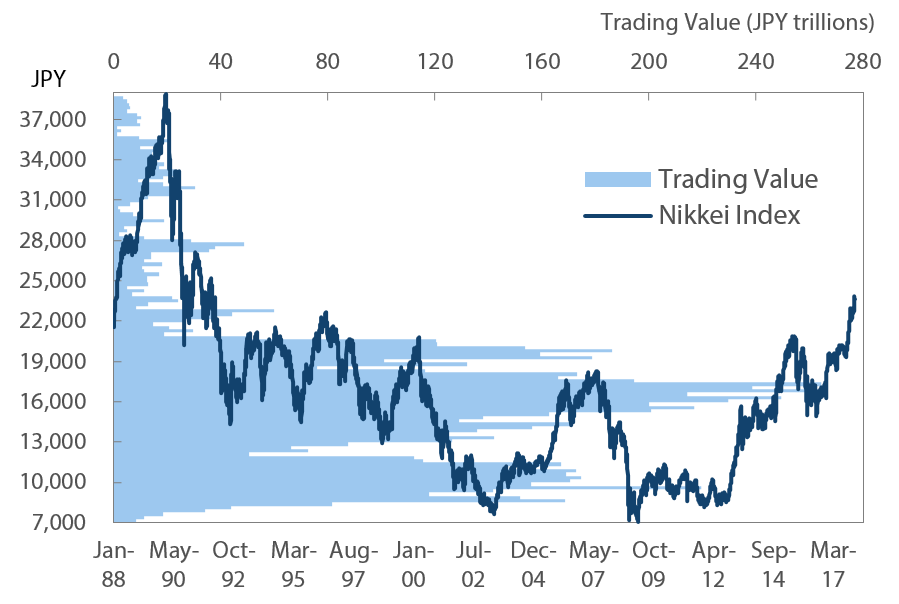 A generation has passed since the Nikkei Index was last at the 24,000 level. Retail investors have therefore changed, with the different experiences of younger investors resulting in them adopting different approaches. For example, the large retail investor inflow into robotics-themed funds over the past year6 suggests that many of these investors understand that enhancing productivity is imperative for Japanese companies in the long term given the decline in the working age population (Exhibit 6). 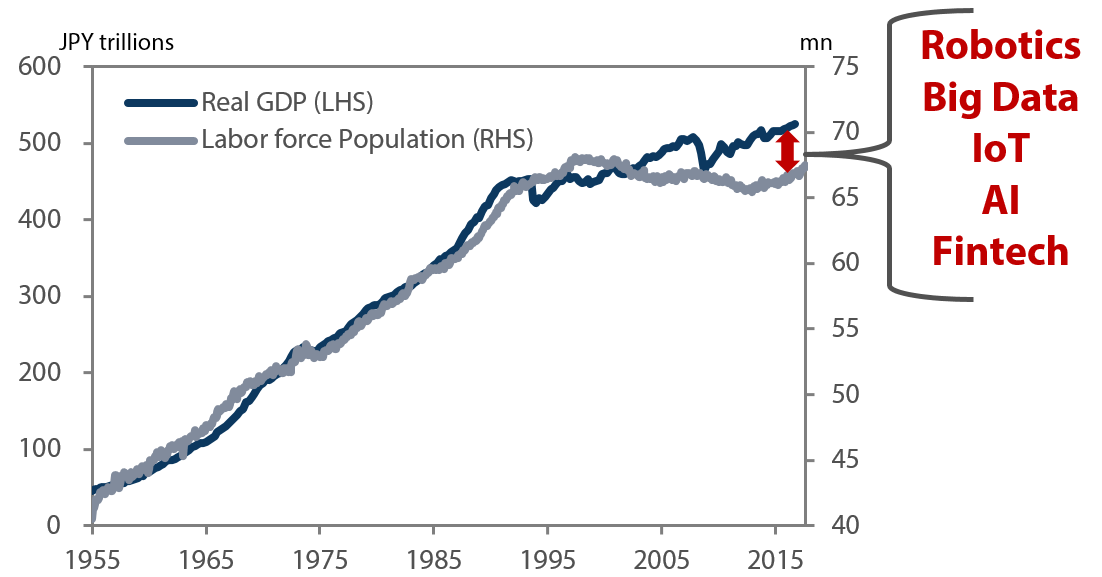 We therefore believe the massive amount of assets parked in money reserve funds (JPY 13 trillion), which is currently at a historical high, may finally begin to flow into different pockets of growth in the equity market. We will also keep an eye on the annual spring wage negotiations between large businesses and labour unions this year, as they will impact retail investor sentiment and behaviour.

Invest with Nikko AM

The changing shape of China's economy