Our Chief Investment Officer in Japan details the many reasons for optimism on Japanese equities in 2016.
Share this
by Hiroki Tsujimura, Executive Vice President, Global Head of Investment, CIO
19 January, 2016

The environment could be the lucky one 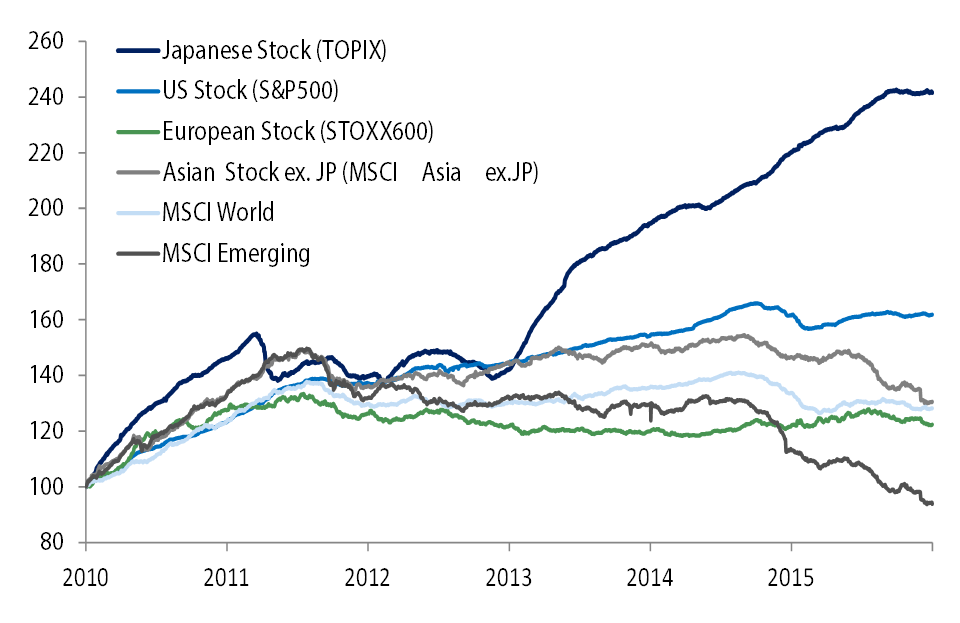 Corporate earnings growth in Japan is clearly on a different path than in other regions, as the chart above highlights. As a result, we think Japan equities continue to present attractive investment opportunities. A 15-year deflationary environment has forced many publicly listed companies to dramatically overhaul their cost and revenue structures. Currently, about 60% of major listed company revenues are estimated to come from overseas. Thanks to the massive quantitative and qualitative easing programme introduced by the Bank of Japan (BOJ), we expect a weaker yen will accelerate corporate earnings growth.

It is necessary to consider, however, how solid the growth in earnings per share (EPS) will be. In our view, there are two points worth emphasising:

Japanese equities benefit from strong US dollar and low oil price In our view, if the trend of a strong US dollar and low oil price continues, the Japanese equity market will enjoy a significant competitive advantage over its global peers. This is due to two main factors: (1) major Japanese listed companies rely heavily on exports and revenues from overseas; and (2) oil and natural gas (of which almost 100% are imported) have become Japan's core energy source due to the suspension of its nuclear power plants.

The current 12-month forward price/earnings ratio (P/E) for Japan equities is around 14x (Chart 2), significantly lower than the historical average.

In general, equity market performance can be explained by earnings growth and the expansion of P/E multiples. However, close examination of the recent performance of Japanese equities reveals an interesting phenomenon: the 'Abenomics' equity rally over the past three years can be explained solely by earnings growth, with no contribution from the expansion of P/E multiples. This is in stark contrast to US and European equity markets, where P/E multiples expanded by more than 20%. 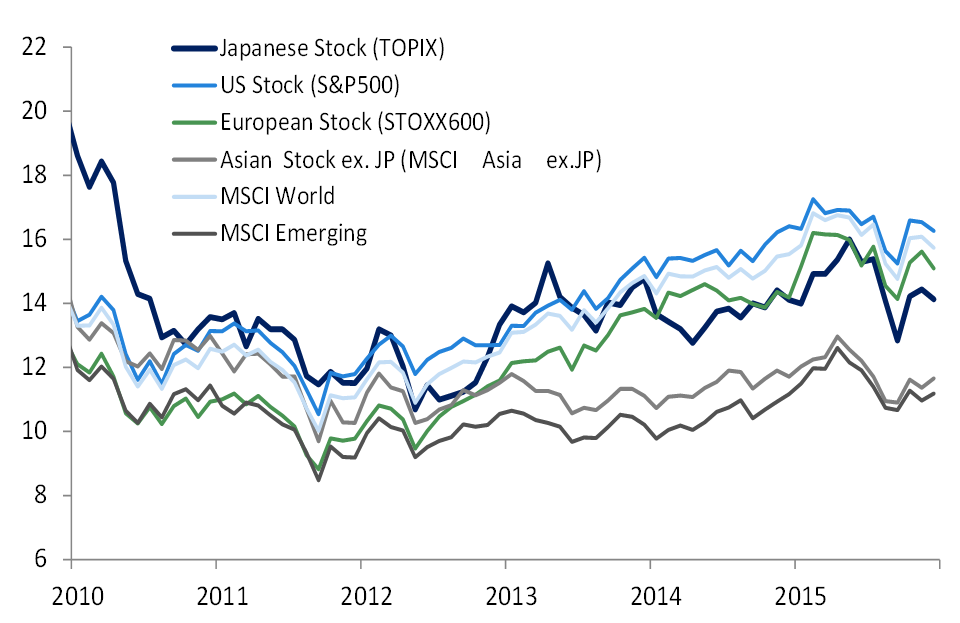 In the case of US equities, one of the reasons for EPS growth and P/E expansion over the last five years was a massive amount of share buybacks. This offers us some insight into the future direction of the Japanese equity market given the recent introduction of Japan's Corporate Governance Code. 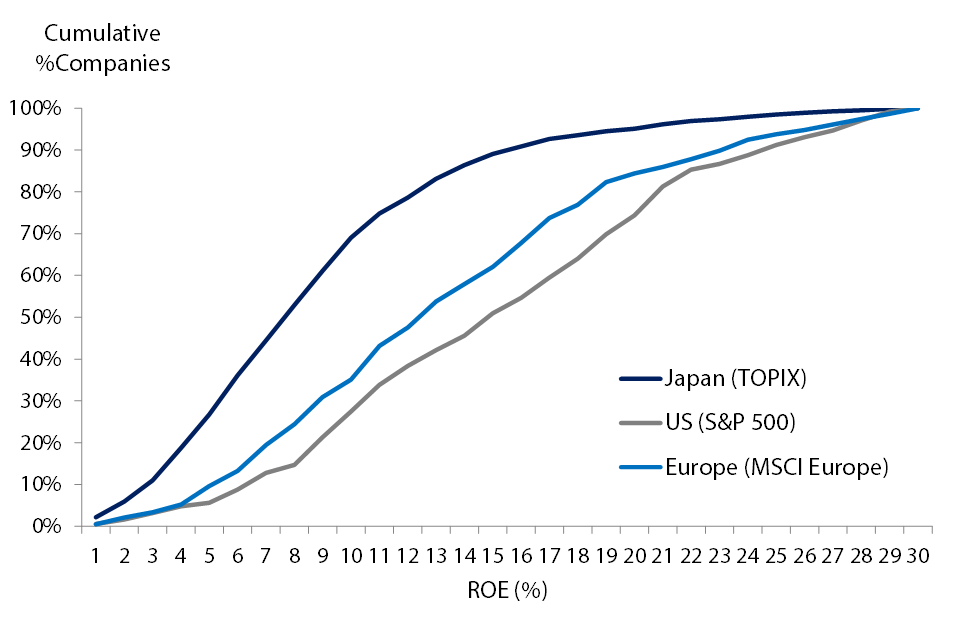 Source: Bloomberg, Toyo Keizai (December 2015) * Companies with ROE less than 0% or greater than 30% have been removed for the purpose of this analysis *** ROE above is ROE (FY1)

In addition, the average ROE of Japanese firms continues to deteriorate as their shareholder return ratio (sum of dividends and share buybacks as a percentage of net income) remains around 40%, despite corporate earnings reaching an all-time high. This is partially explained by listed companies continuing to hold high levels of cash, which recently exceeded their hitherto historical high of JPY 100 trillion (approximately USD 831 billion). 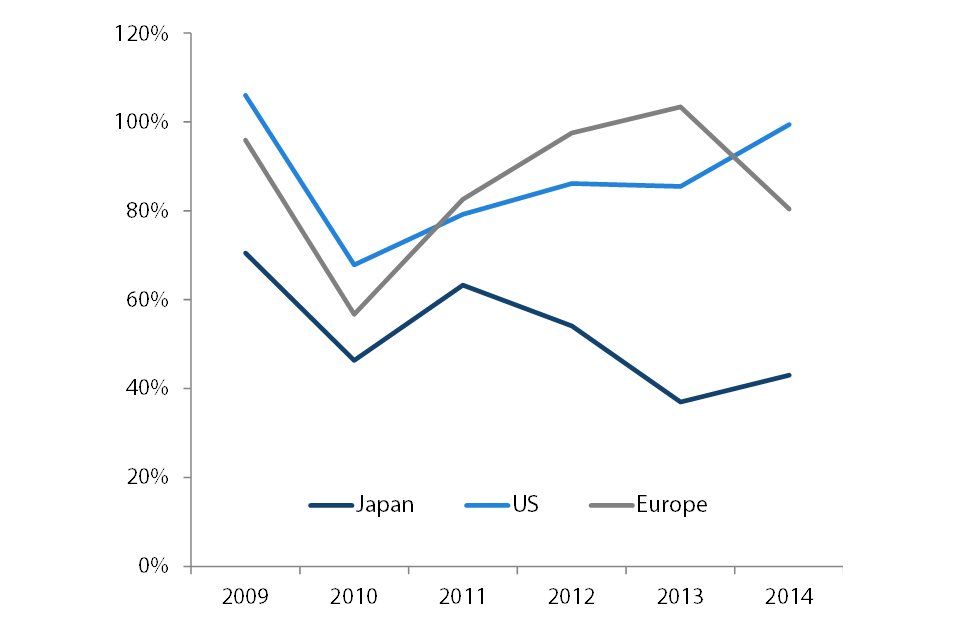 Source: Toyo Keizai (Japan, as of end-Mar 2015), FactSet (US and Europe, as of end-Dec 2014) * The graph is based on past data and does not guarantee future investment performance.

The much-awaited Corporate Governance Code finally came into effect on 1 June 2015 and all listed companies were required to either comply with the code or explain their reasons for not complying by the end of 2015. The Code encourages companies to draft and disclose mid-term business plans. This is expected to result in improved ROE as many companies would have to incorporate ROE targets into their mid-term plans.

Therefore, we can expect to see a substantial increase in corporate actions. In particular, we think that there will be increased momentum for share buybacks and dividend hikes in 2016.

In fact, we have recently seen signs of change with regard to corporate actions. In September 2015, the Japanese equity market declined 8% as foreign investors sold approximately USD 20 billion in Japan equities — the largest amount in any given month since the Tokyo Stock Exchange (TSE) started gathering such data. At the same time, Japanese domestic investors, both retail and institutional, bought a significant quantity of Japan equities. This was particularly true of corporations, which engaged in about USD 6.4 billion in share buybacks, also the largest amount since the TSE started gathering such data. 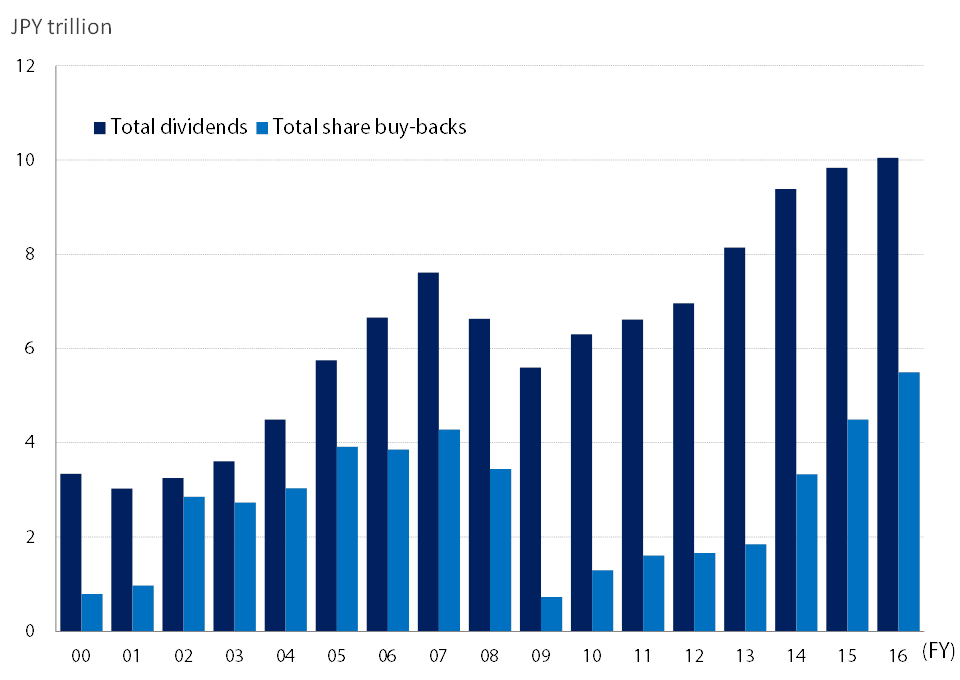 *Data for FY15 & 16 are estimates Source: Nikko AM (based on data deemed reliable)

We believe that the yen will gradually depreciate against the US dollar due to the divergence in US and Japanese monetary policy. While it is highly likely the BOJ will keep printing money to achieve its inflation target, the US has already stopped its quantitative easing programme. However, the pace of the yen's depreciation is likely to be much slower than it has been over the past two years due to the dramatic improvement in Japan's current account (thanks to the low price of crude oil), the expansion of net exports, and the large increase in the number of tourists visiting Japan.

That said, due to the BOJ's strong commitment to increase inflation and the fact that the yen is the principal measure of inflation expectations, it is hard to imagine in such a scenario that the yen would continue appreciating against the US dollar.

More by Hiroki Tsujimura
Invest with Nikko AM

The changing shape of China's economy